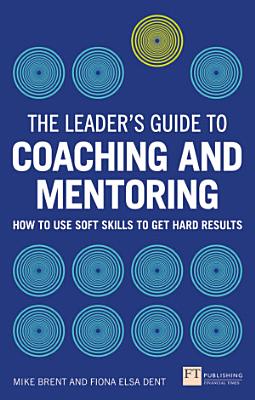 The Leader’s Guide to Coaching & Mentoring is a highly practical handbook that helps managers get the most out of their people. It includes grounded advice on the practicalities of both coaching and mentoring – such as how to structure a session – as well as core content on: · The skills required for coaching and mentoring, including listening, questioning, observing body language, challenging and affirming · The established processes for coaching and mentoring, such as GROW, relational coaching, reverse mentoring and solution-focused coaching · The scenarios in which coaching and mentoring skills are particularly appropriate, for example, coaching under-performers, coaching star performers and coaching for career development There is also a handy section on the 10 pitfalls to avoid when coaching or mentoring. Written in the no-nonsense and engaging style of the other Leader’s Guide books, this is the best tool on the market for managers wanting to coach their people to optimum performance. 'In this hands-on book, Mike and Fiona highlight the real difference between conventional management and effective leadership: management is a profession, while coaching is much wider; it encourages social interaction and a focus on human relationships at work. That’s what new generations expect and respect.' Laurent Choain, Chief People & Communication Officer, Mazars Group 'It’s not always easy for managers to recognise what real coaching is, let alone its value. This book makes a compelling case for the Manager as Coach and contains real, usable examples of how to go about it.' Ian Johnston, Chief Executive, Dubai Financial Services Authority

The Leader’s Guide to Coaching & Mentoring is a highly practical handbook that helps managers get the most out of their people. It includes grounded advice on

Coaching & mentoring skills are essential to help people reach their full potential. Once the preserve of qualified external coaches, all managers are now expec

The Leader's Guide to Coaching in Schools

Grow your leadership skills to bring out the best in your school! Help your staff get “unstuck” no matter what challenges they are facing through solutions-

The Leader's Guide to Coaching and Mentoring

The Leader’s Guide to Coaching & Mentoring is a highly practical handbook that helps managers get the most out of their people. It includes grounded advice on

This book assists mentors in developing their mentoring skills, offering guidance needed to support the development of beginning teachers in early years, primar

The Leadership of Teams

Teams are everywhere - business, industry, schools, hospitals and government. There are executive, management and cross-functional teams, as well as teams forme

How to Thrive and Survive as a Working Woman

Have you read all the books out there on getting to the top but find yourself wanting not necessarily tips for achieving a high-flying career, but the tools for

The Educational Leader’s Guide to Improvement Science: Data, Design and Cases for Reflection is a collection illustrating applied organizational problem-solvi

The Leader's Guide to Unconscious Bias

A timely, must-have guide to understanding and overcoming bias in the workplace, from the experts at FranklinCovey. Unconscious bias affects everyone. It can lo

How To Be A Good Leader

As a leader, you not only have the responsibility to manage your employees, but also show them the way to reach their full potential and gain personal success.