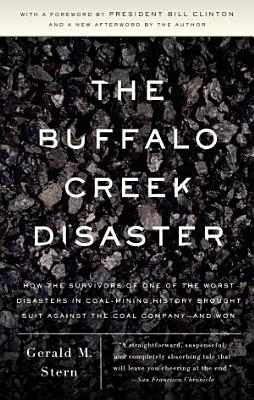 One Saturday morning in February 1972, an impoundment dam owned by the Pittston Coal Company burst, sending a 130 million gallon, 25 foot tidal wave of water, sludge, and debris crashing into southern West Virginia's Buffalo Creek hollow. It was one of the deadliest floods in U.S. history. 125 people were killed instantly, more than 1,000 were injured, and over 4,000 were suddenly homeless. Instead of accepting the small settlements offered by the coal company's insurance offices, a few hundred of the survivors banded together to sue. This is the story of their triumph over incredible odds and corporate irresponsibility, as told by Gerald M. Stern, who as a young lawyer and took on the case and won.

An in-depth account of the February 1972 disaster in which a dam built by the Pittston Coal Company gave way, killing 125 people, injuring more than 1,100, and

Behind-the-scenes account by the attorney from the Washington D.C. law firm that represented the Buffalo Creek Disaster survivors in a lawsuit. There were over

"Despite enormous advances in medical science and public health education over the last century, access to health care remains a dominant issue in American life

Everything In Its Path

The 1977 Sorokin Award–winning story of Buffalo Creek in the aftermath of a devastating flood. On February 26, 1972, 132-million gallons of debris-filled mudd

Handbook of Death and Dying

Encyclopedia of White-Collar and Corporate Crime

Since the first edition of the Encyclopedia of White Collar and Corporate Crime was produced in 2004, the number and severity of these crimes have risen to the