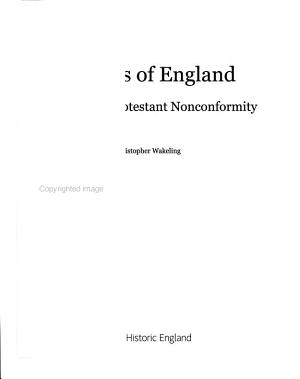 After the Protestant Reformation, religion remained remarkably unstable in Great Britain, and places of worship were the focus of dispute and regular change. Beginning in the seventeenth century, the growth of the Nonconformist denominations left a particularly rich architectural legacy in the form of a vast and diverse network of churches and chapels constructed throughout the towns and cities of England. Although many of these buildings have been lost, about 20,000 remain, some still in use by congregations to this day. The Chapels of England provides the first chronological history of Nonconformist architecture in England, from the seventeenth century to the present day. Beautifully illustrated throughout with interior and exterior photography, the book includes examples that range from small wayside chapels to large urban churches and encompass all the country's regions and each of Nonconformity's main religious traditions. The book's chronological organization allows readers to follow the main developments in the architecture of Nonconformity and understand how these developments fit within broader religious and cultural conversations.

After the Protestant Reformation, religion remained remarkably unstable in Great Britain, and places of worship were the focus of dispute and regular change. Be

The Church of England Magazine

A History of the Church in England

This authoritative account of the Church in England covers its history from earliest times to the late twentieth century. Includes chapters on the Roman, Celtic

The History of the Reformation of the Church of England

The Church in the Nineteenth Century

The nineteenth century was one of the most fascinating and volatile periods in Christian history. It was during this time that Christianity evolved into a truly

This accessible book is for anyone who would like to understand more about the architectural history of English churches. Clear and easy to use, the text explai

American Revisions and Additions to the Encyclopaedia Britannica

A wide ranging new history of a key period in the history of the church in England, from the 'Glorious Revolution' of 1688-89 to the Great Reform Act of 1832. T