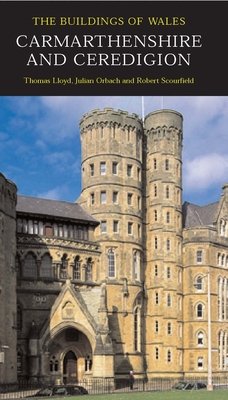 This sixth volume of the Buildings of Wales series covers two counties, Carmarthenshire and Ceredigion (formerly Cardiganshire) in the south-west of Wales. Like the same authors' Pembrokeshire, the volume covers an architecture still little known, hut encompassing a sweep from prehistoric chambered tombs to the high technology of the world's largest single-span glasshouse. The Buildings of Wales, founded by Sir Nikolaus Pevsner (1902-83), will, when complete, document and describe the architecture of the Principality in seven regional volumes, complementing the sister series on England, Ireland and Scotland. In each one a gazetteer details all buildings of significance from megalithic tombs and Iron Age hill-forts, via grand seventeenth-century houses to Victorian domestic extravaganzas, great industrial centres and monumental public buildings. The countryside is explored to reveal churches, chapels, farmhouses, and traces of early industry. The gazetteer is complemented by an introduction which explains the broader context and builds a complete picture of the country's architectural identity. Each work is illustrated by numerous maps, plans and photographs, completed by glossaries and indexes, and gives a comprehensive and illuminating survey of the buildings of Wales.

This sixth volume of the Buildings of Wales series covers two counties, Carmarthenshire and Ceredigion (formerly Cardiganshire) in the south-west of Wales. Like

Wales is being transformed from a country dependent upon heavy industries to one of the most exciting regions of Western Europe. It is attracting a diversity of

Electoral Registers Since 1832, and Burgess Rolls

“A” Collection of Public General Statutes

A collection of the public general statutes passed in the ... year of the reign of Her Majesty Queen Victoria