A Tributary Model of State Formation 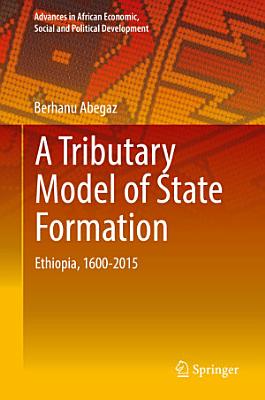 A Tributary Model of State Formation: Ethiopia, 1600-2015 addresses the perplexing question of why a pedigreed Ethiopian state failed to transform itself into a nation-state. Using a comparative-institutionalist framework, this book explores why Ethiopia, an Afroasian civilizational state, has yet to build a modern political order comprising a sturdy state, the rule of law, and accountability to the ruled. The book provides a theoretical framework that contrasts the European and the Afroasian modes of state formation and explores the three major variants of the Ethiopian state since 1600 (Gondar, Shewa, and Revolutionary). It does this by employing the conceptual entry point of tributarism and teases out the implications of this perspective for refashioning the embattled postcolonial African political institutions. The primary contribution of the book is the novel framing of state formation through the lens of a landed Afroasiatic peasantry in giving rise to a fragile state whose redistributive preoccupation preempted the emergence of a productive economy to serve as a buoyant revenue base. Unlike feudal Europe, the dependence of the Afroasian state on arm’s-length overlordship rather than on tightly-managed landlordship incentivized endemic extractive contests among elites with the capacity for violence for the non-fixed tribute from independent wealth producers. Tributarism, I argue here, stymied the transition from a resilient statehood to a robust nation-statehood that befits an open-order society. This book will be of interest to scholars in economics, political science, political economics, and African Studies. Berhanu Abegaz is Professor of Economics, College of William & Mary (USA).

A Tributary Model of State Formation

A Tributary Model of State Formation: Ethiopia, 1600-2015 addresses the perplexing question of why a pedigreed Ethiopian state failed to transform itself into a

Industrial Development in Africa critically synthesizes and reframes the debates on African industrial development in a capability-opportunity framework. It rec

Argues that states formed in East Asia a thousand years earlier than in Europe, emulating China rather than competing with it.

Rethinking Middle East Politics considers a range of debates on the character of political and socioeconomic development in the Middle East, focusing on the lin

This volume brings together for the first time a significant body of Professor Barnes' scholarly writing on Japanese early state formation, brought together so

Neither war nor preparations for war were the cause or effect of state formation in East Asia. Instead, emulation of China—the hegemon with a civilizational i

John Fox here offers a fresh and persuasive view of the crucial Classic-Postclassic transition that determined the shape of the later Maya state. Drawing this d

Featuring a sweeping array of essays from scholars of state formation and development, this book presents an overview of approaches to studying the history of t